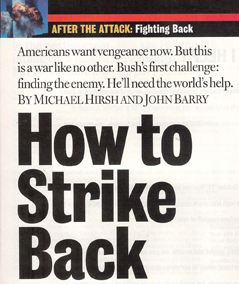 MEDIA ROOTS — A pair of Internet archivists have uploaded Part Five of US corporate media print publications from the immediate days and weeks following 9/11. The duo plans to post more multiple full issues of Time and Newsweek as well as other timely magazines that are filled with propaganda. This issue of Newsweek is from just 2 weeks after the attacks.

Following 9/11, news media accelerated at an amazing rate, and most companies soon adopted Internet versions of their paper or magazines. Before this was commonplace, many interesting pieces of information printed about that day most likely were never reprinted again–due to either misinformation or abandonment by the propagandists. As we know, many government narratives and unfounded claims about 9/11 were re-printed without any journalistic investigation.  Also worth noting is how candid some of the reporting is, where journalists admit to things like ‘patriotic bias’ clouding their ability to do actual journalism.

Part Five, God Bless America, gives us a look at a Newsweek magazine published just days after the attacks. The issue includes an in depth explanation of why the US must invade Afghanistan, Iraq and other countries that ‘harbor terrorists’. It also aims to explain why US intelligence networks didn’t collaborate to stop the attacks, already forming the groundwork for the ‘incompetence theory.’

We hope that these archivists continue this fascinating project, it could uncover aspects of the ‘War on Terror’ that most journalists and researchers have completely forgotten about.  Above all, it reveals the extent of the conditioning the American people were subjected to immediately after the traumatization of this nation.

They have put the issue up in PDF Format, which can be downloaded here with an update to this article as well as a slideshow (see below).

Check out previous installments, Part One: The Terrorism Survival Guide, Part Two: How Scared Should You Be?,  Part Three: Afghanistan War Run Up and Part Four: War and We Must Win

One thought on “The 9/11 Propaganda Archive: God Bless America”