CHRISTIAN SCIENCE MONITOR– More than 20 years ago, many Americans decided they could no longer watch as racial segregation divided South Africa. Compelled by an injustice thousands of miles away, they demanded that their communities, their colleges, their municipalities, and their government take a stand. 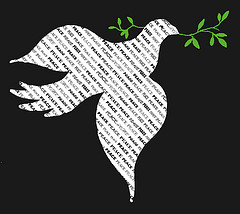 Today, a similar discussion is taking place on campuses across the United States. Increasingly, students are questioning the morality of the ties US institutions have with the unjust practices being carried out in Israel and in the occupied Palestinian territories. Students are seeing that these practices are often more than merely “unjust.” They are racist. Humiliating. Inhumane. Savage.

Sometimes it takes a good friend to tell you when enough is enough. As they did with South Africa two decades ago, concerned citizens across the US can make a difference by encouraging Washington to get the message to Israel that this cannot continue.

A legitimate question is, Why should I care? Americans are heavily involved in the conflict: from funding (the US provides Israel with roughly $3 billion annually in military aid) to corporate investments (Microsoft has one of its major facilities in Israel) to diplomatic support (the US has vetoed 32 United Nations Security Council resolutions unsavory to Israel between 1982 and 2006).

Why do I care? I am an Israeli. Both my parents were born in Israel. Both my grandmothers were born in Palestine (when there was no “Israel” yet). In fact, I am a ninth-generation native of Palestine. My ancestors were among the founders of today’s modern Jerusalem.

Both my grandfathers fled the Nazis and came to Palestine. Both were subsequently injured in the 1948 Arab-Israli War. My mother’s only brother was a paratrooper killed in combat in 1968. All of my relatives served in the Israeli military for extensive periods of time, some of them in units most people don’t even know exist.

In Israel, military service for both men and women is compulsory. When my time to serve came, I refused, because I realized I was obliged to do something about these acts of segregation. I was denied conscientious objector status, like the majority of 18-year-old males who seek this status. Because I refused to serve, I spent a year and a half in military prison.

Some of the acts of segregation that I saw while growing up in Israel include towns for Jews only, immigration laws that allow Jews from around the world to immigrate but deny displaced indigenous Palestinians that same right, and national healthcare and school systems that receive significantly more funding in Jewish towns than in Arab towns.

As former Prime Minister Ehud Olmert said in 2008: “We have not yet overcome the barrier of discrimination, which is a deliberate discrimination and the gap is insufferable…. Governments have denied [Arab Israelis] their rights to improve their quality of life.”

The situation in the occupied territories is even worse. Nearly 4 million Palestinians have been living under Israeli occupation for over 40 years without the most basic human and civil rights. One example is segregation on roads in the West Bank, where settlers travel on roads that are for Jews only, while Palestinians are stopped at checkpoints, and a 10-mile commute might take seven hours.

Jonathan Ben-Artzi was one of the spokespeople for the Hadash party in the Israeli general elections in 2006. His parents are professors in Israel, and his extended family includes uncle Benjamin Netanyahu. Mr. Ben-Artzi is a PhD student at Brown University in Providence, R.I.