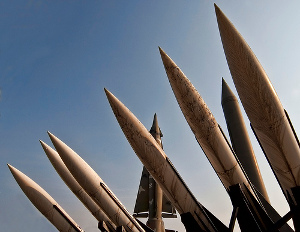 MEDIA ROOTS – Over a decade ago, the U.S. Air Force expressed interest in fielding a next-generation, hypersonic missile known as the High Speed Strike Weapon (HSSW).  Recognizing the lucrative money available in Department of Defense contracts, war industry officials began conceptualizing suitable prototypes.  Understanding the nature of HSSW and the corrupt practices of its primary developer should lead one to question the core operating conventions inherent to the U.S. military-industrial complex.

Corporate manufacturers of HSSW must meet certain design goals set by the Department of Defense.  These operational functions require an HSSW which launches from submarines, traditional surface ships, bombers, and fighter jets, and which reaches a top speed of around five-times the speed of sound.

The Pentagon’s design goals for HSSW also include “classified elements,” necessitating a SECRET security clearance (considering the number of U.S. citizens with SECRET clearance exceeds two million, this restriction shouldn’t pose a problem).  Although Boeing and GenCorp Aerojet have tendered their own HSSW design, Alliant Techsystems Inc. (ATK), which is known for corporate success with the X-43 and also supplying the Department of Homeland Security with up to 450 million hollow point rounds of .40 caliber ammunition, is the leading candidate for Pentagon funding.

ATK’s Board of Directors and senior corporate leadership fester within an environment rife with conflicts of interest.  Mark Ronald and Ron Fogleman possess the most egregious of them among the company’s Directors.   Mr. Ronald is Vice Chairman of the Defense Business Board (DBB), an organization which claims to provide the Secretary of Defense with “independent advice” and “outside private sector perspective” about successful business practices.  However, Mr. Ronald cannot possibly provide advice of an “independent” nature, given unimpeded access to both senior Pentagon officials and ATK’s Board of Directors.

Ron Fogleman, former Chief of Staff of the Air Force, is a charter member of The Durango Group, an organization which pays its members to “help private companies win and administer Pentagon contracts.”  The Durango Group’s gurus “move seamlessly between roles as paid advisers to the [Armed] Services and paid consultants to defense companies in the same subject areas.”  As USA Today reports, Durango employees like Fogleman get paid by “the military for advice and by defense contractors who want consulting help.”  This corrupt arrangement further benefits The Durango Group as its gurus “serve as corporate directors or advisers for other companies” across the industry.  And the wheel of corruption goes ‘round.

Corruption on ATK’s Board of Directors can also occur subtly through the diaphanous, revolving door between private corporations and public service:  Martin Faga wields clout as former Director of the National Reconnaissance Office; April Foley was once a member of the Board of Directors at the U.S. Export-Import Bank; and Tig Krekel was once Vice Chairman of J.F. Lehman & Company, a private equity firm whose chairman helped run the unscrupulous 9/11 Commission.  ATK’s day-to-day corporate leadership also exists in a climate ripe for unprincipled behavior, as its members possess experience and influence in General Motors, Lockheed Martin, the Senate Appropriations Committee, and the National Defense Industrial Organization.  With this insider economic, political, and military might, ATK is in prime position to place corporate profit ahead of integrity.

Unfortunately, these conflicts of interest are commonplace in the U.S. war industry and elicit no formal, sustained Congressional concern.  Within this culture of Congressional complicity, senior executives from Lockheed Martin, General Dynamics, and EADS pled privately with Defense Secretary Leon Panetta in June to avoid Pentagon budget cuts.  Such collusion tacitly reaffirms the Pentagon’s prioritization of U.S. corporate profit over U.S. national interest.  ATK is certainly pleased with this arrangement, since the U.S. government accounts for 68% of its sales.  By allowing “one-on-one sessions with interested prime contractors,” the Pentagon continues to abet graft, collusion, and industry corruption.

Given the corrupt nature of ATK’s leadership and the war industry in general, it is rational for U.S. citizens to inquire further. Pertinent questions include:

How does HSSW contribute to the escalatory cycle of global arms manufacturing?

Since World War II, the U.S. arms industry has produced weapons to confront inflated threats (e.g. communism, terrorism).  In response, various “enemies” produce weaponry to deter U.S. aggression.  The Pentagon then uses the enemies’ weapon production, however minute, as justification to continue allocating vast sums of taxpayer dollars to the U.S. arms industry, resulting in an upward spiral of militarization, which clogs all ends of the globe.  Production of the HSSW continues this deleterious tradition.

Is HSSW another black hole at which the Pentagon can throw funding, while enriching corporate weapon manufacturers?

Yes.  As Wired.com pointed out, the Pentagon has a mediocre track record producing hypersonic technologies.  For example, this spring the Pentagon lost a costly Falcon prototype over the Pacific.  Bloomberg reports this loss cost the U.S. taxpayer at least $320 million, but the Air Force places the cost at half a billion dollars.  Despite these expenditures, the project continues.  The combination of existing weapon-delivery systems (e.g. strategic bombing, SLBM, and ICBM) and weapon systems in development (e.g. Prompt Global Strike weapon) render HSSW excessive.  There is no need, aside from corporate profit, to kill human beings with any greater speed or glut.

Profligacy isn’t confined to USAF programs; espionage and infantry programs can be equally wasteful.  Among these programs are NSA’s Trailblazer, which cost $4 billion before being cancelled, and the Army’s Future Combat Systems (FCS), which cost roughly $1.5 billion before cancellation.  Moreover, the Project on Government Oversight (POGO) has easily identified another $700 billion in wasteful Pentagon funding (these figures do not include the trillions wasted on wars of aggression since 2001).  To put these figures in perspective, $700 billion is enough money to give every inmate in the United States an Ivy League education and $91,000 spending money.

What does HSSW tell us about the Defense Department contracting process?

The core architecture in which the Pentagon develops and purchases weaponry is fundamentally flawed.  Although HSSW’s procurement process is relatively mild compared to the disasters besetting other weapons platforms, it still highlights the flaw of overestimating performance while underestimating costs.

Many more questions remain unexplained: In a world hyped as rife with “asymmetric threats,” why is the Pentagon stuck in a Cold War mindset building weaponry to strike conventional targets anywhere in the world within an hour?  At what point does weapon manufacturing cease to protect the country and start to provoke conflict?

Instead of being a valuable addition to the welfare of U.S. citizens, HSSW merely increases global arms manufacturing, wastes taxpayer dollars, and exposes fundamental flaws in the Pentagon’s weapon procurement process.  Concerned citizens marvel at the rabbit hole’s depth. What began as a passing curiosity into the basics of the ATK and its HSSW has revealed a confluence of incompetence and corruption between the defense company and the Pentagon.  Given such wasteful venality, it is incumbent upon the U.S. citizenry to inquire, educate, mobilize, engage, and advocate to change the status quo of the military-industrial complex.