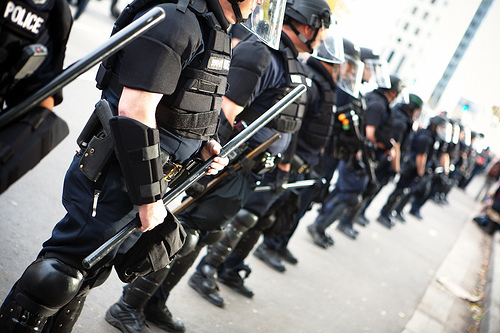 MEDIA ROOTS — After 9/11, U.S. war budgets skyrocketed, leading to a Pentagon purchasing binge previously unrivaled in history.  Through the 1033 Program and Homeland Security grants, thousands of law enforcement agencies have received an excess of military weaponry and equipment, which were once reserved for war zones abroad.

In the style of Amazon.com, local police forces can even create “want lists” to facilitate future acquisition.  As a result, those charged with protecting and serving Hometown, USA now possess military-grade weaponry and garb.  This militarization concerns all U.S. citizens, because taxpayer dollars ultimately fund police militancy.

The Posse Comitatus Act was designed to limit federal military involvement in local law enforcement activity.  While the Act is still nominally intact, it is increasingly bypassed through militarization of local police.  Militarization is exemplified by arming domestic drones and conducting military exercises in major U.S. cities, including nighttime maneuvers above Miami and Los Angeles, and daytime tank training on the streets of St. Louis.  Even small-town Peñitas, TX receives Pentagon weaponry.

Domestic police forces classify many of their weapons as “less-than-lethal” or “non-lethal” in order to shirk the thornier questions associated with militarization.  These euphemisms are outright lies, since many of these weapons can cause death, including tasers and rubber bullets.  (These concerns don’t stop local police from adding Taser shotguns to their arsenals, or shooting an Attorney with rubber bullets, at which police officials laughed hysterically.)  LRADs have been strutted out at town hall meetings, the 2009 G-20 meeting in Pittsburgh, the 2010 G-8 meeting, the 2012 NATO summit in Chicago, against OWS protests, and elsewhere.  The LRAD Corporation boasts about many local police departments using LRADs, including Boston, San Diego, and Santa Ana.  Unfortunately, by marketing harmful weapons as “non-lethal,” both the compliant U.S. public and zealous U.S. police departments accept their increased use.

Government officials who support increased militarization fail to realize the Pentagon is selling more than just military-grade weaponry and material to local police forces.  It is tacitly providing domestic police with a paramilitary ethos, which your local police department may perceive as a green light to behave in a militant manner.  Officials who support militarization as a safeguard against terrorism are misdirecting their concerns, since U.S. citizens are more likely to drown in a bathtub than die in a terrorist attack in the U.S.  So with no terrorist threat in sight, police forces often end up using military equipment during daily police operations, sometimes with devastating consequences.  Meanwhile, all government officials ignore the basic facts that spending on domestic priorities (e.g. education, healthcare, clean energy) creates more sustainable jobs than manufacturing military weaponry and equipment.

Since the last protest movement of national significance, the U.S. government has been learning how to better deal with public dissent, irrespective of public grievances.  Meanwhile, no mass protest movement has adapted accordingly.  This leaves the peaceful United States citizenry facing an inappropriate use of military-grade weaponry, whether lethal or non-lethal.  Essentially, USA is now a weapons testing ground against first amendment activity, often enabled by local officials.

After pressure from independent and international media outlets, the Pentagon temporarily halted a small portion of their weapons sales to certain domestic police forces.  Sensitivities to election year politics surely played a part – no branch of the federal government wishes to remind the public of police-state activities or the conflicting message associated with spending rampantly during times of austerity.  Regardless, the real question remains: what is the ramping up of police militarization preparing for?

Potentials are grim, since the U.S. government completely ignores the political predicament articulated by the Occupy Wall Street movement.  It also avoids confrontation by relocating key functions, like moving the G8 Conference from Chicago to Camp David.  When ignorance and avoidance prove inadequate, the government opts to confront protests head-on and crush them where they sprout up.  If the Occupy Wall Street movement resurges this summer, look for the U.S. government to continue this pattern of ignorance, avoidance and physical oppression.

For further discussion about the militarization of U.S. police, click here.