(A quick note to US readers: left and right in this piece do not refer to the American liberal-conservative spectrum – both of which are considered neoliberal – but to the broader left-right spectrum as traditionally conceived, ranging from far-left communism/socialism to far-right fascism.) 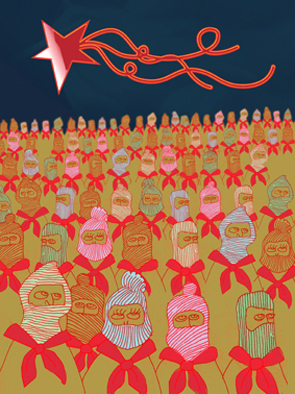 It’s been an eventful few weeks for the Zapatista Army of National Liberation (EZLN), also known as the Zapatistas, midway through their 20th anniversary year.

First, Jose Luis Solís López, also known as “Compañero Galeano”, was murdered by a paramilitary group with ties to the Mexican government, which also injured fifteen other Zapatistas and destroyed a school, clinic and water system in the same attack. The attack then prompted the Zapatistas to change strategies, with well-known spokesperson Subcomandante Marcos stepping down.

These developments serve to remind us of the EZLN’s status as, in the words of Chris Hedges, “the most important resistance movement of the last two decades” – important enough to warrant the rather violent attention of the Mexican government and its paramilitary associates.

The EZLN, a group based in the state of Chiapas in southern Mexico, launched an armed rebellion against the Mexican government on January 1, 1994 as an act of protest against the North American Free Trade Agreement (NAFTA), which entered into effect on the same day. However, instead of attacking the Mexican state and society and causing endless bloodshed, the Zapatistas set up a system of self-governance in the territory it controlled, creating autonomous communities each with its own health clinic and schools to fill the void that the Mexican government had actively sought to widen in the interests of US and Canadian multinational corporations.

What the Zapatistas demonstrate is a vision of the notion articulated in the motto of the World Social Forum: another world is possible. They provide evidence that contradicts the belief that the status quo under neoliberal capitalism, in which the haves have it all and the have-nots are left to fend for themselves, is not only the best system but indeed the only viable system. The Zapatistas represent a victory for the oppressed peoples of the world over the powerful political and economic interests that rule over them. But more importantly, they represent a victory for the values of egalitarianism, compassion and solidarity – what I call the left-wing ethos. A victory over the idea that those who rule have the divine right to further their own interests, regardless of the consequences for the rest of humanity – an attitude that epitomizes what it means to be “right-wing”.

Marko Attila Hoare boils down the left-right spectrum to a simple distinction: that “the left supports the redistribution of wealth from the rich to the poor while the right opposes it”. But we can remove the entire spectrum from politics entirely to expose the values that underlie them: lefties value social equality, whereas righties value social hierarchy. Why, though? The answer lies in our individual worldview. As a self-identified lefty, I consider it more than possible for all of us to peacefully coexist in the world and have all of our common needs met, if (and only if) that’s the goal that we all work together to try to achieve. In a left-wing worldview, it’s therefore neither necessary nor ethical for us to undermine others in order to benefit ourselves. In other words: compassion, not competition. Without claiming complete objectivity, a right-wing worldview revolves around the idea that we live in a dog-eat-dog world in which the best we can do is fend for ourselves and get our share before someone else takes it.

Human history has been almost entirely dominated by the right-wing worldview. It’s been an endless cycle in which privileged groups have taken turns dominating each other in a seemingly eternal battle between the powerful and the powerless. From the imperial conquests of the ancient world through European colonialism, the two World Wars and Soviet communism to modern neoliberal capitalism, it’s always been the same story, flowing through different chapters but reaching the same inevitable conclusion: Oligarchy. It’s a story familiar to the Zapatistas as well as countless other sites of confrontation between the haves and the have-nots in recent years. The hierarchical, conflict-ridden relationship today between those who rule the world and those who are ruled, between corporate bosses and workers, between autocrats and their citizens, between the rich and the poor, is a continuation of this cycle of domination.

The right-wingers among us will assert that history simply reflects human nature, that it is in our nature to be maliciously selfish rather than compassionate, that this is the best we can do, or even that there’s nothing wrong with the world we’ve created. But their argument fails to acknowledge that the dominant worldview of the past has created the world we know today. As an example, the domination of the indigenous populations of the Americas, Africa, Asia and Oceania by European invaders and colonizers was not an inevitable result of human nature, but rather a product of widespread extreme right-wing beliefs such as Manifest Destiny and the white man’s burden. Similarly, the dominant worldview of the present will determine the world of tomorrow. A child raised in a society that values getting ahead at all costs is encouraged is far more likely to act accordingly than one raised in a society that values empathy and compassion. The dominant worldview in a society is therefore not inherent in human nature but in fact reinforces itself.

Right-wing theorists have a crucial role to play in promoting their worldview, too. “Realist” international relations scholars, capitalist economists, or simply those at the top of the social hierarchy love to tell us how it’s in our nature to always act in self-interest. They tell us that “greed is good” and that we all collectively benefit from constantly undermining each other, as ludicrous as that may sound. Yet, for the most part, even despite their contempt for those below them in the social hierarchy, even right-wingers behave in an incredibly left-wing manner towards those closest to them. And that’s because humans organized themselves into what we nowadays call “societies” precisely so that we could all benefit from being interdependent. That interdependence required us to develop compassion to allow us to survive in a society. The “savage” who undermines and betrays everyone he or she comes into contact with doesn’t survive for very long and, sociopaths aside, doesn’t find much happiness either. Surely we as a species are capable of applying that same logic to our everyday actions in today’s world so that we can all thrive at the same time instead of striving to be the “last man standing”?

Roman Krznaric couldn’t have put it any better: we need an empathy revolution. We need to turn the right-wing world that we live in into a left-wing one in which we recognize our fellow human beings as worthy of a livelihood and worthy of happiness and, in return, receive the same recognition. As the economic crisis in Greece goes to show, humans are capable of compassion even in the most desperate of situations: rather than stealing from each other, many Greeks are stepping in to provide the services that their government has failed to deliver and those that some of their compatriots can no longer afford, from food to medical services to street lighting – all for free. Similar systems have been devised in Serbia as well as in Macedonia, where numerous bakeries have introduced “solidarity baskets” to allow customers to buy an extra bun or piece of bread to leave to those who can’t afford to eat. And many customers indeed comply.

But showing empathy on our part only does half the job. While it spares those around us from our own potential malice, what it doesn’t do is liberate ourselves from those who have their hands around our necks. That involves critically examining and rethinking the false ideologies and pseudo-theories invoked by the powerful for the sole purposes of justifying their own dominating behaviour. After all, ideologies are all too often used as pretenses to mask the hidden agendas of those who assert them rather than a reflection of the values that they truly believe – in other words, purposeful bullshit. We mustn’t forget how the left-wing idea of communism was employed by self-described revolutionaries to justify right-wing oligarchic tyranny. Similarly, we can’t afford to look away when libertarians cite the dogma of enriching big businesses at the cost of everyone else, or when rich countries proclaim free trade to justify infiltrating the economies of developing countries. We’ve been raised to regard Soviet-style communism as tyranny and Western capitalism as freedom, but we need to recognize both for what they are: systems of oppression backed up by pseudo-theories that have no empirical basis and only serve those who preach them.

The empathy revolution needs a theoretical and social component. Neither pacifism nor confrontation can do the job alone. We need to channel our discontent into action by adopting the autonomist ethos of the Zapatistas to build the society we want. We need to form cooperatives and make use of cryptocurrencies, local currencies, open source, open knowledge, peer-to-peer practices, the sharing economy and countless other methods of grassroots social and economic organization the mainstream media doesn’t want us to hear a word about. What these methods all have in common is that they’re all built on the basis of cooperation and collaboration rather than malice and treachery – exactly what society needs and what the oligarchs don’t want.

Modern society is diseased and needs treatment. It’s only when we renounce one-upmanship in favour of cooperation and collaboration that we’ll be able to construct a society not for the few at the top, but for all of us. After all, isn’t fulfilling our mutual needs the whole point of even living in a society? It’ll require a good deal of empathy and creativity, as well as plenty of critical thinking to distinguish truth from pseudo-theory and other purposeful bullshit. Left-wing and right-wing are no longer a question of politics, but a question of social values and social justice. The right-wing worldview has failed us, and as the Zapatistas have shown, another world is certainly possible. It’s time to recognize that, for the purposes of redeeming ourselves from perpetual oligarchy, left is right.

5 thoughts on “Dismantling Our Right-Wing World”