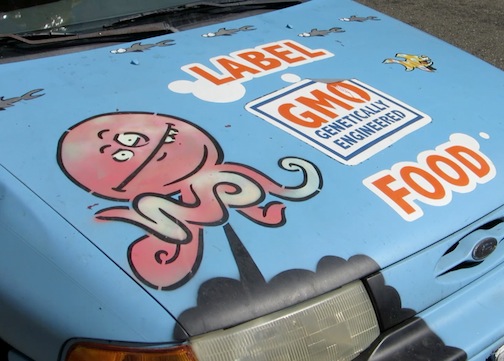 MEDIA ROOTS — In most countries in Europe, it is required by law for any food company to say with a simple label that genetically modified components are used in their products. America is behind the curve and has been ever since GMO became common place. The FDA could very easily put into place a new regulation that requires the same type of labeling here, unfortunately the FDA (unsurprisingly) has bought into the propagandistic idea that labeling these products in this way would ‘hurt sales’ of these large conglomerate food companies. Buying into corporate propaganda is the best case scenario, when it’s more likely that the revolving door and collusion between the FDA and these large corporate food companies effectively makes the FDA’s job to protect them at all costs.

Most average Americans express disbelief that the FDA would allow people to consume food that hasn’t had sufficient or long term human testing, again falsely imagining our government as some sort of ‘protector’ that has our best interest in mind instead of of the interests of the rich and the powerful. In California a new proposition is being voted on in the upcoming election, Proposition 37 which simply is asking for genetically modified based food to be properly labeled as such. Go to Right To Know, the campaign to increase awareness about Proposition 37 as well as GMOs in general. Media Roots visited a protest happening at the FDA offices in Oakland, California to raise awareness about this crucial issue. Watch our field report below.