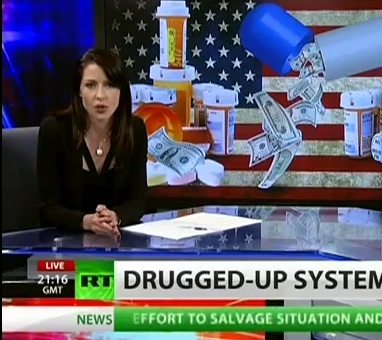 MEDIA ROOTS — Whether for healing, meditation, or recreation, psychoactive substances have played a significant role in most cultures throughout human history. The United States is of no exception.

In 1895, the Bayer aspirin company used to market Heroin as an over the counter cough syrup. Up until the 1930s, opium tincture, morphine and heroin were available over-the-counter and millions of Americans were becoming addicted. In contrast, many of these same substances are now considered highly dangerous by the Drug Enforcement Agency and in many cases are illegal altogether.

Today, there are new names for nearly equally powerful and addictive substances like Vicodin, Oxycontin, Dilauded and Fentanyl. Fentanyl, a drug far more potent than heroin or Morphine comes in convenient lollypop and patch form for easy consumption which is distributed legally by pharmaceutical companies.

Most pharmaceutical production facilities do not start with pure chemicals when manufacturing these medicines. They instead use opium latex derived from poppies to produce drugs such as Vicodin. India and Nepal, for example, maintain opium latex factories to export this material globally. This practice remains legal while natural opium consumption and distribution can carry a ten-year prison sentence in most states.

With the war in Afghanistan continuing to rage on, heroin production has actually increased because of the continued presence of the United States military. Additionally, President Obama’s recent healthcare legislation has only stimulated opiate production anddistribution by mandating consumers to buy into the health insurance industry. Consequently, profits of large pharmaceutical companies continue to grow while the ubiquity of painkillers for future Americans is ensured.

RT – Approximately 100 million working American are uninsured in the US and lack of health care ranks as the seventh cause of death. President Obama has attempted to reform healthcare, but has only fallen short. Many critics believe Obama forcing people in America to obtain healthcare is a power grab from pharmaceutical companies. Dr. Darcy Smith, a licensed clinical social worker, joins us to discuss this growing trend of pill popping.