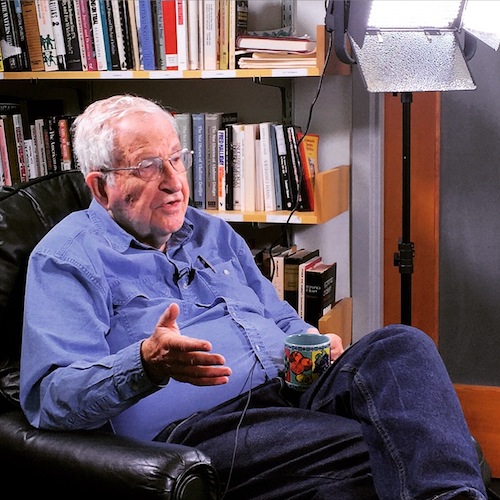 World renowned linguist and philosopher, Noam Chomsky, joins Abby Martin to discuss the so-called War on Terror, the warped political spectrum in the United States, and how power functions in the Empire.

Chomsky argues that both the Democratic and Republican party have shifted to the right, with Republicans going “off the spectrum”, dedicating themselves to the interests of the extremely wealthy and powerful, and today’s Democrats becoming what used to be called moderate Republicans.

Delving into libertarianism and the role of predatory capitalism, Chomsky discusses the institution of neoliberal policies, which have pushed for things like major financial institution bailouts, and government subsidies to energy corporations. The contention that markets provide choices is farcical, argues Chomsky, as the market focuses you on individual consumption of consumer goods. “New libertarians”, according to Chomsky, are deeply confused as to the meaning and history behind classical libertarianism, and what they propose would lead to society collapsing,

Describing the Iraq war as of one of the last century’s greatest atrocities, Chomsky asks what right the United States has in bombing or invading a country, for whatever reason. While there is a lot of criticism in regards to the US killing civilians inside Kunduz hospital, “what about killing [Taliban members]”, asks Chomsky. “What right do we have to kill somebody in some other country?”

Abby Martin once again takes up beyond the headlines and brings us to the very heart of the issues in this episode of The Empire Files.