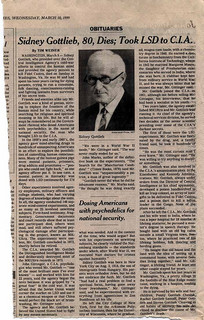 MEDIA ROOTS – The feverish hysteria of the “red scare” during the 1950s and 1960s prompted the Central Intelligence Agency to do some dirty deeds, not the least of which was a pet project called Operation Midnight Climax.  The C.I.A. conducted the operation in the hopes of finding a truth serum by dosing civilians with psychotropic drugs, namely lysergic acid diethylamide.  Subsumed by the mind control program MK Ultra, Operation Midnight Climax became its sordid C.I.A. offshoot.

When the Central Intelligence Agency launched MK Ultra in the early 1950s, it was a reactionary and paranoid response to alleged mind control tactics being used on American prisoners of war in North Korea.  Fearing that the Soviets, Chinese and North Koreans were revolutionizing interrogation techniques, the C.I.A. began implementing a sinister, top secret program involving “scientific” experimentation on unwitting American civilians.  The C.I.A.’s desire to keep pace with the Soviet threat of mind control thus spawned Operation Midnight Climax, a spinoff project from the the depraved minds of George White and Sidney Gottlieb.

During the 1960s, the American status quo was being rocked by a raucous counter culture, with volatile anti-government sentiment and rebellious undercurrents affecting virtually every aspect of society.  Taking advantage of the chaos, White and Gottlieb established “safe houses” in New York City and San Francisco where they secretly dosed people with LSD, without the test subjects’ consent or prior medical examination.  Gottlieb, a chemist, provided the brains behind the operation.  However, the majority of the blame for the ill-conceived and unethical program belongs to George White.  Under his tutelage, Operation Midnight Climax developed into a sensationalist story more likely found in the pages of Hustler and High Times than from an actual program carried out by the United States government.

Throughout the experiments, George White behaved like a power drunk sadist, reveling in his ability to foment debauchery.  He preyed on dozens of unsuspecting victims, filling their heads with potent doses of acid.  White, a bureau of narcotics veteran and a former Office of Strategic Services (the precursor to the C.I.A.) agent, oversaw three safe houses in San Francisco where the human guinea pigs were lured in by drug addicted prostitutes.  The hookers would pour the johns LSD laced drinks.  Meanwhile, White would sit and observe behind two way mirrors installed in the rooms.  The drug took hold after some time and perversions quickly ensued.  The rooms were fitted with listening and recording equipment, providing agents further lurid insights into minds of the drug addled johns.  But the unsuspecting johns were not the only victims.  After a night of trying to drown the acid in booze, Wayne Ritchie, White’s coworker, lost his grip on reality and was arrested for armed robbery.  Whether it was a colleague like Ritchie, a random drunk at a bar, or a friend at a dinner party, White spared no one on his psychedelic dosing campaign.

The medically unsupervised LSD fest continued until 1964, when John F. Kennedy forced the resignation of C.I.A. director Allen Dulles.  The resulting shockwaves running down the C.I.A. hierarchy eventually exposed MK Ultra and Operation Midnight Climax.  In 1966, in the incoming C.I.A. director Richard Helms, ordered the destruction of all MK Ultra and Operation Midnight Climax files and paperwork.  The files from the New York City safe houses were destroyed, but thanks to bureaucratic blundering, 20,000 documents were saved, unveiling the insidious nature of what took place on Telegraph Hill in San Francisco.

Think about how the government played a major role in demonizing and undermining the 1960’s counterculture.  Think about Hunter S. Thompson writing about Hell’s Angels, the motorcycle gang comprising some of the most reviled outlaws of the time.  Think about Richard J. Daley, the mayor of Chicago during the 1968 Democratic National Convention and his allegations about Abbie Hoffman’s intent to lace the city’s water supply with LSD.  Think about the numerous educational films that the government produced to trumpet the evils of LSD.   Now think about how the government deflected responsibility for some of that decade’s worst transgressions, and how they themselves were  some of the biggest drug villains of the era.  Given that our government frequently repeats history’s mistakes, what could Uncle Sam be doing now that we’re blissfully unaware of?

SF Weekly–  It’s been over 50 years, but Wayne Ritchie says he can still remember how it felt to be dosed with acid.

He was drinking bourbon and soda with other federal officers at a holiday party in 1957 at the U.S. Post Office Building on Seventh and Mission streets. They were cracking jokes and swapping stories when, suddenly, the room began to spin. The red and green lights on the Christmas tree in the corner spiraled wildly. Ritchie’s body temperature rose. His gaze fixed on the dizzying colors around him.

The deputy U.S. marshal excused himself and went upstairs to his office, where he sat down and drank a glass of water. He needed to compose himself. But instead he came unglued. Ritchie feared the other marshals didn’t want him around anymore. Then he obsessed about the probation officers across the hall and how they didn’t like him, either. Everyone was out to get him. Ritchie felt he had to escape.

He fled to his apartment and sought comfort from his live-in girlfriend. It didn’t go as planned. His girlfriend was there, but an argument erupted. She told him she was growing tired of San Francisco and wanted to return to New York City. Ritchie couldn’t handle the situation. Frantic, he ran away again, this time to the Vagabond Bar where he threw back more bourbon and sodas. From there, he hit a few more bars, further cranking up his buzz. As he drank his way back to Seventh and Mission, Ritchie concocted a plan that would change his life.

Now in his mid-eighties and living in San Jose, Ritchie may be among the last of the living victims of MK-ULTRA, a Central Intelligence Agency operation that covertly tested lysergic acid diethylamide (LSD) on unwitting Americans in San Francisco and New York City from 1953 to 1964.

“I remember that night very clearly, yes I do,” he said in a recent interview. “I was paranoid. I got down to where I thought everyone was against me. The whole world was against me.”

After the day had bled into night on Dec. 20, 1957, Ritchie returned to his office in the Post Office Building and retrieved two service revolvers from his locker. He was going rogue.

“I decided if they want to get rid of me, I’ll help them. I’ll just go out and get my guns from my office and hold up a bar,” Ritchie recalls. “I thought, ‘I can get enough money to get my girlfriend an airline ticket back to New York, and I’ll turn myself in.’ But I was unsuccessful.”

Out of his skull on a hallucinogen and alcohol, Ritchie rolled into the Shady Grove in the Fillmore District, and ordered one final bourbon and soda. After swallowing down the final drops, he pointed his revolver at the bartender and demanded money. Before joining the marshals, Ritchie served five years in the Marines and spent a year as an Alcatraz prison guard. But the cop had suddenly become the robber.

Read more about the C.I.A. gone wild with acid during the 1960s.

One thought on “Operation Midnight Climax: Sex, Drugs and the CIA”