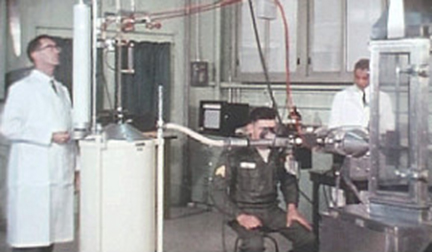 MEDIA ROOTS — “In this same dream I had a girl waiting for me down the hall. I wanted to go out and see her but the nurse wouldn’t let me so after trying to fight my way out and failing I called the MP’s who promptly arrested them. After that I found out that they were going to beat me up so I tried to make friends with the one who appeared to be the leader. It must have worked because I don’t remember a beating.”  —unknown male soldier volunteer at Edgewood 1963, dose: IM 7.0 ug/kg

When the movie Jacob’s Ladder came out in 1990, many people were probably not aware that it was loosely based on 1968 military experiments conducted in lab and field exercises at the Edgewood Arsenal proving ground in Maryland.  Even though Jacob’s Ladder ends with a brief description of 3-quinuclidinyl benzilate (BZ) and its effects, Adrian Lyne, the film’s director, has denied the powerful and dangerous hallucinogenic compound was ever used on human test subjects.  However, there is evidence to suggest otherwise.  In a recent lawsuit against the U.S. government, a document showing BZ’s solubility in human blood has been uncovered.

A lawsuit was filed last week by eight U.S. military veterans against, virtually, every branch of the Defense Department, including Veterans Affairs and even Attorney General Eric Holder.  The veterans were guinea pigs in a massive military-funded and controlled human drug experiment program, which shows that, among other drugs like Mescaline, LSD, and amphetamines, they also subjected people to a drug which lasts 80 hours and creates a fever-like dream of reality, better described as a waking, walking nightmare called BZ.

At least one other account exists apart from the one excerpted above from an unknown soldier at Edgewood Arsenal as well as another from a military scientist, Dr. James Moore, who was accidentally exposed trying to synthesize the compound.  In Dr. Moore’s instance, he administered himself with acridine, as an antidote for BZ’s effects.  In the unknown soldier’s case he had over three days of waking nightmares, imagining fights with hospital staff and MPs, and having hour-long imaginary conversations with an ex-girlfriend about her surprise pregnancy announcement.  Beyond this, Media Roots has been unable to locate additional verified first-hand accounts.

BZ was modeled after atropine, an active chemical found in Datura.  Indigenous North and South Americans have used Datura and other similar plants which contain atropine (e.g., Belladona, Brugmansia) in ancient spiritual rituals up until the present day.  Besides psilocybin, and n,n-DMT, atropine-containing medicinal plants are proliferated globally around the world’s ecosystem more than any other hallucinogenic psychoactive drug.  Unlike DMT and psilocybin, Datura never caught on recreationally because of its dangerous and unpredictable nature.  In the wild, Datura plants (or pretty much any plant containing the active ingredient) contain huge differences in potency, making it almost impossible to give someone an accurately measured or safe dose of the plant extract.  Even administering a pure chemical ‘psychedelic’ dosage of atropine can lead to heart failure or stroke.

This didn’t stop the US government during the height of its drug experimentation days from trying to harness its power and re-tool the active chemical in Datura into a powerful weaponized gas to be used on the U.S. military battlefields.

It’s not hard to guess what the effects were like beyond the trip reports we have based on its similarity to a Datura.  On Erowid.org’s Datura ‘effects’ section, they list delirium capable of bringing about auditory, visual, and tactile hallucinations indistinguishable from reality.  This waking dream-like state can lead to unconscious violent behavior much like a drunken ‘black-out.’  It’s also reported uncommonly large doses can cause hallucinations lasting for two to three days.  This mirrors available data regarding the duration of BZ’s effects.

If the U.S. government in 1968 was willing to go as far as attempt to weaponize, which essentially means aerosolizing it or making it airborne, a more concentrated form of the world’s most terrifying and unpleasant hallucinogen, who can say whether or not they also toyed with doing the same to another more recently discovered hallucinogen, Salvinorin A? The effects of Salvinorin A are just as unpredictable as Datura but far shorter lasting.  We know that in the late ‘90s the Russian government attempted to use a gaseous form of Fentanyl, one of the most powerful opiates—more powerful than oxycontin, heroin or morphine—to diffuse a hostage crisis.  The end result was the tragic, accidental deaths of many of the hostages, by overdose.

The effects of what BZ would do to a group of armed soldiers would be completely unpredictable and most likely dangerous—what’s depicted in the film Jacob’s Ladder would be a worst-case scenario.  No one really knows the extent to which—or in what situations or environments—the U.S. government actually tested hallucinogenic drugs on its soldiers, which is part of the reason why similar lawsuits in the past have been dismissed.  Only in the last decade has the military declassified enough information that these Guinea pig soldiers have been allowed to tell their health-care providers what took place at Edgewood Arsenal.  It’s unfortunate that, since they volunteered, the U.S. government can pass off responsibility.  But these experiments were done at a time when the general public had no idea what these hallucinogens did, making informed consent unlikely.

Ethically, it would be hard to make the case that these soldiers knew what the consequences would be to their physical and mental healths.

UPDATED NEWS — There were no warnings about side effects or potential long-term health risks, according to Wray’s deposition.  Although he wasn’t forced to take the drugs, he was “given an option of not taking the test, but with innuendos — with the option of bad punishment if we did not participate,” he says in the deposition transcript…..Of all the events that took place during Wray’s time at Edgewood, Kathryn says one disturbing memory he told her about that stuck with him for more than three decades:

Wray and eight others were taken to a clinic room and told to lie on cots, where they were hooked up to IVs and left alone, Kathryn says. Within 5 minutes he was so high he could not find his legs, he told her. “Then he said it felt like the bed was floating off of the floor — and then the pain hit.” He described it as a “terrible, terrible headache, so bad he could not open his eyes, so bad he was just screaming in pain,” making him throw up several times. A man in a nearby bunk was “trying to claw his own eyes out” — until Wray and another volunteer managed to get out of their bunks, crawl over to the panicking man and stop him, he told her.

“And while all of this going on, there was a nurse standing in the corner — she was taking notes. She made no attempt to aid this gentleman,” says Kathryn. For days afterward, he was “completely disoriented and terrified the pain would begin again,” Kathryn says.

One thought on “BZ and Secret U.S. Government Experimentation”