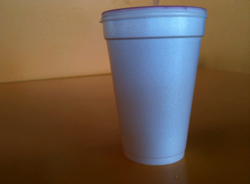 ENVIRONMENT CALIFORNIA– Take-out food and drinks in Palo Alto will come in either paper or plastic containers after the city council on Monday voted unanimously to ban expanded polystyrene, popularly but incorrectly called Styrofoam.

The ban will take effect next Earth Day — April 22, 2010 — despite calls for an earlier start from some on the council. A restaurant group thanked the city for the grace period, saying it will help small businesses use up existing supplies before making the transition.

As a concession to the trade group, the city offered an additional one-year “hardship” exemption to businesses that can show they would be hurt financially by the switch to other materials.

Palo Alto follows Oakland, San Francisco, Millbrae and several other cities in banning polystyrene foam, which is hard to recycle and often ends up as litter. Volunteers in Palo Alto have photographed bits of the foam in local creeks, where it can harm fish and other wildlife.

The ban will force businesses to shift to packaging made of either recyclable plastic, paper or other compostable materials. According to a city survey, more than two-thirds of Palo Alto restaurants already avoid polystyrene foam.