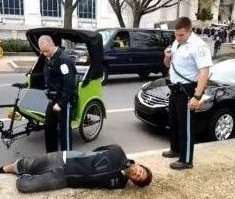 MEDIA ROOTS — Independent journalists have a passion to get information out to individuals who might not otherwise receive it and most often require supplementary sources of income to survive.  Here at Media Roots, life’s no different.

My second line of work is operating a pedicab, a three-wheeler that helps shuttle tourists to various monuments, memorials, and museums in the nation’s capital.  Pedicabs have been in operation here for over five years and boast a perfect safety record and a near-perfect customer satisfaction record.  And while 38 police departments now claim jurisdiction within the District, only the U.S. Park Police find issue with the hard-working and generally light-hearted independents operating on the National Mall.

Most pedicabbers have other lines of work, like indy journalists, and are typically rather articulate and rational.  The majority have never had previous issue with the law and are not looking to create any unnecessary trouble for law enforcement.  But after only a few hours at the third-most popular tourist attraction in the United States, anyone can witness how the aggressors wear an official costume, while the pacifists cruise around accepting gratuities.

While peddling on Sunday, March 25, I found myself pulling up to the Smithsonian Natural History Museum at approximately 3:00 pm.  Another pedicab appeared to have been abandoned in front of the museum.  And nearby was a Park Police cruiser.  In order to prevent the missing operator from having to pay the $195 to recover the cab from the impound lot, I briefly attempted to cart the empty cab back to our shop downtown.

Almost immediately, Officer Blake of the U.S. Park Police, the same officer whom had issued me a previous citation just weeks before (only to be dismissed by DC adjudication services), appeared and ordered me to not take the human-powered vehicle.  I immediately complied and moved approximately 20 feet from the scene.  Blake would follow me and continued to instruct me I couldn’t stop where I had – in front of a parked tour bus.

“Where would you like me to go?” I asked.

“Off the Mall,” he would reply with an unlawful attempt to exile me from over 300 acres of public property.

Unsure how to respond, I steered my pedicab to what appeared to be a legal parking spot a motor vehicle had just vacated.  Again, the officer was hot on my trail.

“Give me your ID. You’re getting a ticket.”  I complied with no hesitation.  In order to maintain a level of accountability, I also pulled out my video camera to capture the scene.

“Put your camera away,” he continued.

“I don’t have to put my camera away.”  After all, I am the organizer for DC CopBlock and quite familiar with the First Amendment.

“Put your hands behind your back.”

I had officially been placed under arrest, despite the fact that two other pedicabbers were seemingly ignored by officer Blake.  I was in utter disbelief that not only was I getting arrested again (the first arrest in November, also a charge for resisting arrest, was eventually dismissed by federal prosecutors), but I was now getting arrested for a Constitutionally-protected act.

As the handcuffs were aggressively placed on my already-sore wrists, I became dizzy and uncertain about the officers’ intentions.  They screamed orders at me, even though I was not talking back nor were there any loud noises nearby.  A tourist and his son a few feet away were visibly traumatized by the incident with the younger crying and his father yelling at the police for their blatant display of excessive force.

“Stop resisting,” Officer Hiatt continued to yell at me, even though he was close enough to kiss me.

“I’m not resisting,” I calmly replied, uncertain what else to say.

The officer then slammed me down to the gravel.  Because I was already cuffed, I couldn’t break my fall and ended up landing face-first.  The fall knocked me out for a minute and the trauma to my shoulder is still present to this day.  But the emotional damage of a tyrannical police force, operating without regard to the law or morality might take years to recover from.

Oskar Mosco is a regular contributor for Media Roots

TBD — Two Park Police officers bend down to look at another groaning black-haired pedicab operator, his face against the grass and lying on his stomach on the National Mall. They talk into their radio. On the street is a little green pedicab, abandoned. One officer fastens handcuffs on the young man, a manager at National Pedicabs.

This pedicab operator calls himself Oskar Mosco and is the same one who was arrested last fall and formed the D.C. Pedicab Operators’ Association to advocate for operators amid the evolving regulations and allegations of harassment that have come up in the last year.  He was last arrested in November, but the case was dismissed earlier this year.  The National Park Service controls the pedicab territory of the National Mall, and Park Police enforce the rules.  Yet the NPS is still developing its formal pedicab regulations, which will apparently mirror those the District Department of Transportation released last year.  The Park Police note that D.C. traffic regulations apply, however, and regularly write tickets to the region’s pedicabbers.

Mosco attempts to ask what orders he disobeyed.

“We are no longer discussing this,” the Park Police officer tells him. “You are under arrest.”

Pedicabs are a human-powered transportation option that fill a unique demand in an increasingly petroleum-dependent society. They have proven to be safe and fun in areas that demand a variety of transportation options. The very survival of America’s emerging pedicab industry depend on a population that is informed, and concerned, with the what else can be possible. Those interested in following the development of American pedicab culture can follow the page Everything Pedicab.

Read more about Two D.C. pedicab operators were arrested on the National Mall.