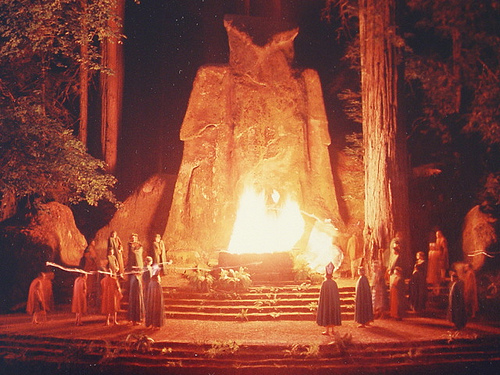 MEDIA ROOTS – For two weeks every July, elite diplomats, oil executives, U.S. presidential hopefuls, Ivy League Presidents, media CEOs, and other members of the .01% carouse together at a secluded Redwood camp out called the Bohemian Grove in Monte Rio, CA.

The Bohemian Club of San Francisco hosts the powerful soiree, where the rich and powerful network, give talks, discuss policy and drink heavily. Regrettably, like other closed door gatherings of the global elite, the public is largely ignorant of this annual meeting.

Aside from the heavy partying similar to how co-eds act on a Cancun vacations or Puerto Vallarta resorts, probably the most peculiar thing that happens at the Grove is the ‘Cremation of Care’ ceremony, where 50 men in monk robes ritualistically sacrifice a life size coffin effigy to a giant 40 foot owl called ‘Molock.’

Media Roots and RT’s Abby Martin went to find out if people in DC know about the Bohemian Grove:

The Occupy Wall Street movement and those who protest the Bohemian Grove share some stark commonalities.  Both are justifiably concerned that an elite group of men make political and economic decisions behind closed doors, without due transparency.  Both are justifiably concerned that police in riot gear – who themselves belong to the 99% – go against their own socioeconomic interests when guarding the power structure of the elite.  Finally, both OWS and Bohemian Grove protestors are outraged that money purchases political power, and those without wealth consequently have no voice in the U.S. political process.  To counteract the ‘Cremation of Care’ ritual, protesters held a ‘Creation of Care’ ceremony to show how they want the Grove’s policy makers to care about the impact made by their policies, not burn them away.  Abby’s interviews with women and men from Occupy the Bohemian Grove protest shed light on these common concerns:

The Bohemian Grove highlights a glaring problem within the U.S. political system: elites meet in secret and deliberate policy behind closed doors, with no transparency, away from the electorate.  As the Occupy Wall Street and Occupy Bohemian Grove movements acknowledge, our own ignorance and idleness allows these activities to continue unabated.  Only through an engaged and informed citizenry can we create an equitable future together where our political representatives works to serve the interests of the community, not themselves.  Even though this year’s Bohemian Grove meeting is already half over, the questions it raises persist:

Abby Martin gives a wrap up of the weekend’s events from Oakland, CA