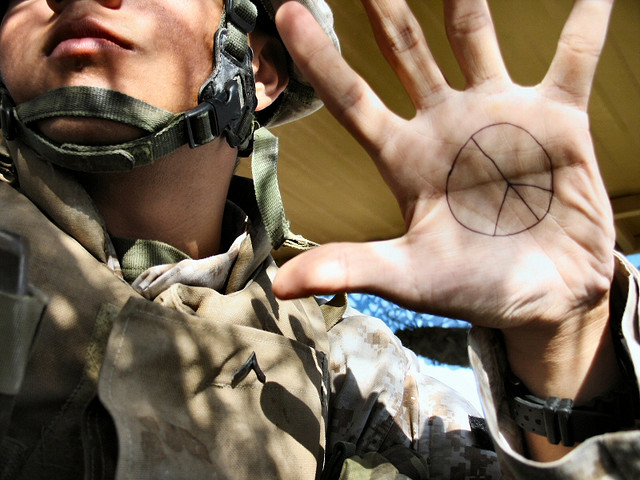 With the controversy surrounding the recent Ukrainian coup and Crimean incursion, the wheels of war are turning once again, churning up an old foe. If you listen closely, you can hear the sound of the Red Menace prop being roused from the warmonger’s hall of archives, dusted off and wheeled down the plush carpet of the military-media complex.

The reanimation of the Cold War has been unleashed before our eyes, drenched in a gluttonous flurry of flashbulbs. The words of so-called “representatives” like Mike Rogers and Lindsay Graham are reproduced on corporate media to promote the pitch, hiding their defense and intelligence connections behind suits, ties and office titles, unable to contain their glee of resurrecting the Kremlin threat. Putin now represents the villain, because the brown-skinned Muslim boogie man has run its course. For months, the shiny new evil archetype has been playing out on your LCD flat-screen, feeding you the one tireless commodity impervious to the myth of scarcity: fear.

Will this media blitz trigger a Cold War redux?

An ominous storm of hegemonic forces has settled over the geopolitical landscape of Europe once again. We are living in deeply troubling times, according to the corporate media. Nevermind the fact that establishment media toes the line of its paymasters, which handsomely benefit from a state of perpetual war. Indeed, the same news networks decrying Russia’s occupation of Crimea were once rallying behind the US when it came to the Afghanistan and Iraq invasions. The few who didn’t fall in line with the pro-war narrative got fired, as Phil Donahue (MSNBC) and Peter Arnett (NBC) can attest.

Nowadays dissent in the media is rare amid the strata of complicity and doublespeak, manufacturing daisy-chains of tepid consent. Yet one silver-lining of objection which has stood strong between the sales pitch of a renewed Cold War and reasonable criticism is RT’s Abby Martin. Recently on her show Breaking The Set, Martin chose to go against the editorial line of RT, denouncing Russia’s military action in Crimea. As Glenn Greenwald of The Intercept said, the day after the show:

“Abby Martin, remarkably demonstrated last night what “journalistic independence” means by ending her Breaking the Set program with a clear and unapologetic denunciation of the Russian action in Ukraine.”

This stance against militarism is nothing new. Abby Martin has been consistent in her dissent against military intervention overall, where since the inception of her show, back in Sept. 12th 2012, she has repeatedly taken on the US and its empire-building schemes. While most of the corporate media has failed to understand Martin’s sustained critique in light of her stance against the Russian occupation, her show’s video vault bears witness to a moral consistency against war.

Martin dissented from the official story that drone strikes are precise and humanitarian, citing a NYU study which found this narrative to be patently false. She underscored how US drones have a shockingly low success rate of only 2% and have even stooped to the level of targeting funerals – an act of state-sponsored terrorism itself. Martin dissented from the official story of Obama’s “hope and change” image waived around triumphantly by his naive supporters. She interviewed US historian Peter Kuznick and muckraker filmmaker Oliver Stone to talk in detail about how Obama has essentially codified the Bush regime’s most aggressive policies, in that Obama has eroded civil liberties like due process via the NDAA under the dubious pretext of the War on Terror.

But most importantly, Martin dissented from the usual glossing of various think tanks like The Council of Foreign Relations and their powerful influence on foreign policy, where most of these organizations comprise a nexus of former corporate media moguls like Tom Brokaw and Fareed Zakaria, along with former White House cabinet officials like Colin Powell and Madelaine Albright. Another example Martin points out is the Atlantic Council, whose membership includes top executives at defense contractors like Northrop Grumman, Lockheed Martin and Boeing. Martin asks the question “why are the top defensive corporations in the world advising our lawmakers on foreign policy?”

The revolving door between public and private entities is bad enough, but when it comes to questions of foreign policy, media and war, it is downright nefarious, as Martin testifies. With Chevron’s recent multibillion dollar trade agreement to mine the Olesky deposit in Western Ukraine, which Kiev estimates can hold close to 3 trillion cubic meters of gas, we need to be vigilant in understanding that the corporate media is in the profit-making, not truth-telling business.

These are but a few examples of Abby Martin’s criticism against the military machine.  With the recent denouncing of Russian militarism, we can say with confidence that Martin’s critique of war transcends nation-lines, standing as a tried and true principle beholden to neither nation nor government but rather to the people and their right to know the truth. Conscious dissent ought to be held in the highest regard. As the late political dissident Howard Zinn once said:

“Historically, the most terrible things – war, genocide, and slavery – have resulted not from disobedience, but from obedience.”

Just look at what obedient Washington correspondents did in republishing government press releases and drumming up support for wars in Iraq and Afghanistan. The corporate media was nothing more than lapdog stenographers for wars of aggression which have been responsible for over a million deaths and tens of millions more displaced from their homes.

In between the warmongering, the corporate media shamelessly pumps out distractions, like the alarming amount of cuss words in Justin Bieber’s police transcript, or whether or not Malaysian Air fell into a black hole a la the TV series Lost (more solid analysis by Don Lemon over at CNN). If and when something of substance comes to light – like Crimea – the large majority of media will spin it in order to sell war. And either you toe the line, or you meet the same fate as Donahue.

The Dissenter’s Kevin Gosztola raises some important questions regarding Abby’s having to report from outside the US media apparatus in order to speak out against military action, American or otherwise:

“Why does someone have to work for RT in order to host a daily news program, where she is free to question military interventions by any country that violates the sovereignty of another country? Why couldn’t she work for CNN or MSNBC? Or a network where she would not have to constantly defend herself as being independent and not a Putin apparatchik?”

Questioning the official narrative of the government isn’t just an attribute of the media, it is the very essence of it. As Ben Franklin said, “It is the first responsibility of every citizen to question authority.”

But Martin’s message goes beyond simply speaking against the editorial line of her employer. Reflecting back on this event, we need to understand that such a bold stance demonstrates one of the highest forms of journalism, in that it denounces military aggression without resorting to the usual fearmongering of corporate media outlets.  As Martin says, what Russia did in Crimea was wrong, but that critique can hold substantive value without resorting to vilifying an entire nation through fear; because when an entire nation is vilified, space is created to unload horrendous policies like the Iraqi economic sanctions, which were responsible for over half a million deaths of children under the age of five.

Martin’s overall message is, essentially, a clear-headed call to action for diplomacy and peace unequivocally striking at the root of the problem, which is war and the profits behind it. As cultural critic, poet and visionary Henry David Thoreau said:

“There are a thousand hacking at the branches of evil to one who is striking at the root.”

Abby Martin is that one striking at the root amid a chorus of hacks. I think it’s time we, the people, put aside the hacks, sharpen our minds and take dead aim. But to strike the root of injustice, we must first detract from the usual paradigms and engage in any and all forms of creative civil disobedience. Dissidence is its highest form – of not just American patriotism but egalitarian justice for all, no matter creed nor nationality. To go against the editorial line of one’s media outlet is the hallmark of a true independent journalist; to go against the elitist line of a war economy is the hallmark of a morally rich person. Let’s speak truth to power.