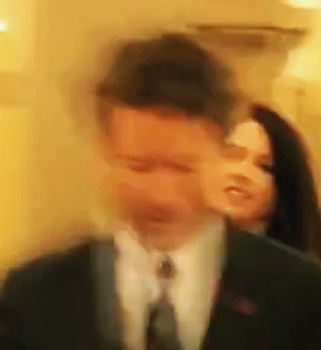 MEDIA ROOTS —  A month ago, Luke Rudkowski of WeAreChange and Abby Martin of Media Roots confronted Senator Rand Paul on camera at the Capitol building as he left a press conference.  The question they both asked him repeatedly is why he endorsed Mitt Romney if he stands in opposition to almost every Libertarian principle that both he and his father, Ron Paul, hold so dear.  Rand’s handler tried to shield Paul from Luke and Abby but failed to do so, creating a few cringe worthy moments that made Rand seem like an utter coward.  He silently looked down in embarrassment without even giving them a glance as he skirted away.

Some people may say that any form of ‘ambush’ journalism is unfair; since you don’t have permission to confront someone, don’t expect a friendly attitude or response.  However, in the past, a pre-Senate Rand Paul was spotted on the street by WeAreChange and asked about Bilderberg.  He seemed eager to speak candidly about the subject, throwing out a lot of anti New World Order rhetoric.

When Abby’s video hit YouTube, the comments and reactions were evenly split.  Some WeAreChange fans said they were okay with his endorsement, and that Rand Paul had to ‘make a deal’ in order to gain ground for their cause.  Others were furious at Abby and Luke for challenging ‘one of their own.’  Overall, many expressed the thought that Rand had sold out and betrayed his own father by catering to the Republican establishment.  Rand and Ron have been big allies with WeAreChange’s philosophical agenda for years, dovetailing off of WeAreChange’s association with the Alex Jones and Infowars.  To those unfamiliar with these different groups’ involvement in underground politics, WeAreChange acts as emissaries of the confrontational style of journalism Alex Jones has been known for, i.e. bullhorning in public buildings and confronting politicians about the New World Order.  Arguably, Alex Jones is following in the footsteps of Bill Cooper and David Icke with a heavy philosophical dose of the John Birch Society.

I started listening to Alex Jones in early 2004, and from the very first broadcast he spoke very favorably of one politician in particular, a Congressman named Ron Paul.  At the time I knew of people like Cynthia McKinney and Dennis Kucinich, but had no knowledge of anyone on the ‘right’ who held strongly to some of my personal beliefs about foreign policy, freedom and civil liberties.  After doing a bit of research on Ron Paul, he seemed like the real deal.  It made sense why Alex Jones was such a fan since Jones considered himself a ‘paleo conservative,’ neither Republican nor Democrat.

Many years later, Paul’s son, Rand, came onto the scene and became a U.S. Senator in Kentucky; this was directly after the media coverage of the Tea Party movement had reached its peak.  Originally, the Tea Party phenomenon was started by 9/11 ‘truthers’ who were fans of Ron Paul and Libertarianism in general because of its focus on restoring liberties and cutting back on military intervention.  Eventually, the Tea Party was co-opted by the likes of Fox News and the RNC which turned it into a mainstream commodity to package and sell.  Rand stood side by side with the Tea Party and even considered himself one of the first Tea Party Senators.  His father, Ron Paul, seemed generally pleased at its success–the Tea Party’s growing appeal would only catapult him to more fame.

Slowly it became clear that Rand was following in his father’s footsteps in a lot of ways, sometimes being one of the few Senators to vote “no” on a bill simply because of a possible threat to civil liberties.  However, it was also clear from the beginning that he was different from his father and didn’t have enough political cache to speak ill of American foreign policy or the War on Terror.  He definitely didn’t risk saying anything remotely close to his dad’s statements about 9/11 being a result of CIA blowback.

Alex Jones still promoted Rand, along with his father Ron, regardless of their differences on 9/11 and the War on Terror.  WeAreChange and the Infowars community seemed to be mostly excited about Ron and his son becoming such well known fixtures in the mainstream media and Republican party.  But there were exceptions–early on I noticed that certain fans became leery of these events, wondering why elements of the RNC would accept Rand and his father with open arms unless there was a bigger chess game at play.

The attention reached its peak during the 2011 Republican presidential primaries, when Ron Paul collected over 200 delegates. Just like in 2008, Ron Paul hinted at running third party if he lost the primary, but didn’t end up launching a third party bid after losing the nomination.  After discovering that Mitt Romney was the clear victor, it’s most likely that both Pauls were asked by their ‘friends’ in the Republican party to endorse him for president.  Apparently, Rand felt compelled to do just that.  Less than a month after the dust had settled, he went on television to announce his endorsement for the war mongerer.

Was he offered a sweet deal or did he go into it with the underlying understanding that if he solidified his friendship with the Republican overlords it would pay off in the long term?  Surely he knew that the liberty movements’ reaction would range anywhere from mildly unhappy/confused to feeling betrayed–but he decided to do it anyway.  Or, is a third possibility conceivable–that Ron and Rand Paul have been used as tools by the Republican party for longer than the Romney endorsement; now they may actually be inadvertently helping this so called ‘New World Order’ they both profess to oppose?

If you have been following the history of the evolution of the Pauls as I have, you can see that Abby and Luke’s video confrontation at the Capitol asking Rand about his curious endorsement of Romney blew up the internet with a heated albeit much needed debate.  Many Paul fans feel as if they have been mislead, and that the Pauls are playing into the hands of the very untrustworthy establishment that has shut out their movement for so long.  Can we blame them?

UPDATE: A week after this confrontational video was broadcast, Abby’s workplace, Russia Today, received an ominous phone call from a Senate committee staffer who represents mainstream media access to the Capitol building.  This representative implied that Abby had trespassed (she did not, they were both credentialed press for the event) into the Capitol to ‘harass’ Rand Paul.  It turns out that it was Rand Paul’s staff that put the pressure on this committee to try to strip Abby of her press credentials and intimidate her.  Luckily, the Rand Paul campaign was extremely naive and had no idea that Abby only becomes stronger and more aggressive in the face of adversity and threats.  Rand Paul has opened a can of worms on this that they will not be able to close. Trying to get a journalist in trouble or even fired from their organization for simply asking a question is one of the sleaziest and oldest tricks in the book; we are even surprised that politicians still employ these strong arm techniques instead of more subtle and nuanced approaches.

I’ve been on the fence for a long time about what the Pauls are really trying to accomplish.  Now that we know for sure that Rand Paul tried to threaten and intimidate Abby simply for asking him why he endorsed Mitt Romney, I think I can safely hop to one side of the fence–the side in which Rand and possibly Ron Paul are clearly working on behalf of the “establishment.”

To hear Abby and I discussing these events on our most recent podcast click here, or stream below