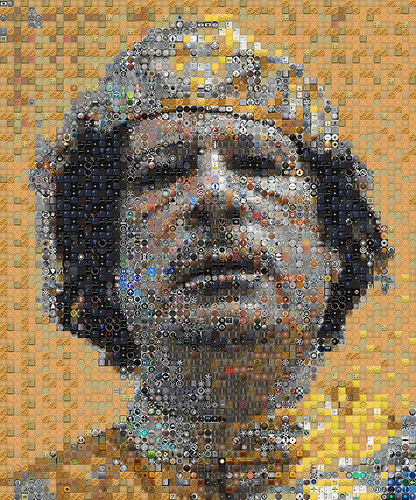 MEDIA ROOTS DISCLAIMER – The views and opinions expressed in this article are those of the author, Muammar Qaddafi, and do not necessarily reflect the position of Media Roots. The translation was undertaken with the intent of providing global youth with alternative opinions about so-called Western democracy. Youth may take bits and pieces from Qaddafi’s words and use them to form ideas regarding possible future forms of government.

The people of the world now confront this persistent problem. Many communities across the world suffer from its associated dangers and profound effects. The world’s communities have not yet succeeded in solving this problem democratically, once and for all. The Green Book offers a conclusive solution to the problem of how to govern.

All political arrangements in today’s world are the result of a power struggle among different instruments of government. The struggle may be armed or peaceful, among or across classes, factions, tribes, parties, or individuals. And it always results in a victory for a particular governing structure – an individual, group, party, or class – and the defeat of the people. In order words, the defeat of true democracy.

The political struggle that results in victory of some candidate by 51 percent of the electorate’s votes leads to a dictatorial governing body cloaked in pseudo-democracy. Keep in mind that over 40 percent of the electorate is then ruled by an instrument of government for which they did not vote, but which is imposed upon them. That, my friends, is dictatorship.

This political struggle might even result in a governing body that represents the minority. Take, for example, when an electorate’s votes are distributed among a group of candidates. One of the candidates obtains a relatively larger number of votes with respect to each of the other candidates. The combined vote of each of these minority candidates constitutes an overwhelming majority. And with one fell swoop, those who cast the minority vote succeed. One considers this a legal and democratic success?! In reality, it’s dictatorship cloaked in false democracy.

This is the reality of the prevailing political arrangements in today’s world; they’re dictatorial regimes and a fabrication of true democracy.

The parliamentary system became a legal obstacle between the people and the practice of power, as the general public was isolated from practicing politics while delegates monopolized rule for themselves. All that remained for the people was the false appearance of representative democracy, like when people stand in long lines to place a voting card in a ballot box.

In order to expose the parliamentary system for what it is, we must find out where this form of assembly came from. It is either elected through an electoral framework, a party, a coalition of parties, or it is appointed. All of these methods are undemocratic in light of the fact that the population is divided into electoral districts, which means that one MP takes the place of thousands or even millions of people depending on the size of the population.

This means that the delegate doesn’t have any popular organizational link to the electorate, since he is considered a representative for all the people, just like the rest of the delegates. This is what the prevailing, traditional form of democracy demands. The people are cut off completely from the representative, and vice versa. By merely obtaining the people’s votes, the representative monopolizes their dominion and becomes the proxy for managing their affairs. In this manner we see the traditional form of democracy bestow sanctity and immunity upon parliamentary membership while not affording the people similar privilege.  This means that parliaments have become a device through which to plunder the popular authority and to monopolize it for elite use. Today, it is the right of the people to fight this arrangement – through a people’s revolution for the sake of shattering the instrument through which delegates are able to monopolize democracy and negate sovereignty – in order for the will of the people to shine through and cry out their new principle: no more replacing the people with bogus “representatives.”

The people who suffer under such arrangements are merely prey over which the party vultures wrestle. The competing factions, which struggle over power, exploit the people and make a fool of them in order to wrest votes from them, while the people stand silently in orderly lines, moving along like beads in a rosary, read to toss their votes in the ballot box. This is done much in the same way they toss paper in the recycling bin. This is the prevailing democracy, practiced throughout the world, whether you live under a system of one, two, multiple, or no parties. In this manner, it is clear that this representation is nothing but total scam.

(Side note: The assemblies that result from political appointments or inheritance don’t fall under any appearance of democracy).

The parliamentary electoral process is based upon propaganda in order to attract votes (in true demagoguery fashion); one can buy votes and bribe people for them. The poor are unable to enter this electoral arena in which the rich exclusively and always succeed.

For sure, philosophers, thinkers, and authors called for the theory of parliamentary representation when kings, sultans, and conquerors were herding an unaware people like cattle. The most these people aspired to was to have at least someone represent them in the presence of those rulers who traditionally refused such a measure. So the people fought long and hard to achieve that ambition. It’s baffling to think that today – after many people’s victories, which led to the age of republics – democracy would have only gotten us a little group of delegates to represent so many people. Democracy, in this form, is an obsolete theory and a worn out experiment. Power should be completely in the hands of the people. Indeed, the most insolent dictators of the world have come to power under the auspices of parliaments.

Translated by Christian Sorensen for MediaRoots