MEDIA ROOTS- As the current US labor system trembles with insecurity, leaking the salaries, benefits and rights of workers across the country, people are increasingly wondering what alternatives there are.

In the Bay Area, one doesn’t have to venture far before coming across a local favorite, the Arizmendi Bakeries. Backed by a development and support cooperative, the Arizmendi Association has 6 cooperative bakeries that specialize in morning pastries, artisan breads and gourmet pizza. Together, these bakeries comprise one of the most successful worker owned associations in the region.

Although cooperatives can take many different shapes, they share a fundamental characteristic: the workers are the ultimate decision-making body. Each worker is a shareholder in the business with one vote in every decision that guides the organization. At Arizmendi, every employee is part owner in the bakery with an equal share in the company.

Tiffany Martinez was a labor rights activist and union organizer before becoming a worker owner of the Emeryville Bakery four years ago.  Despite her years of involvement fighting for worker empowerment, Tiffany was never taught about cooperatives.

“I felt cheated, in the same way that I wished my high school counselors told me about trade school… I didn’t even know about unions until I got to college, which I think is this huge failure in our education system. Young people don’t have exposure to all the different options after high school.”

A co-worker at the union Tiffany worked for told her about Arizmendi. Feeling over worked and underpaid, Tiffany decided to pursue a job opening at the bakery. Following the interview process at Arizmendi – a sit down with the cooperative’s hiring committee and then a tryout in the bakery– she was hired.

“Having dedicated so much of my time as an adult to workers rights I felt really conflicted about having to do anything else or something that contradicted what I had been working for. But the cooperative is about worker’s rights too, so I threw myself into it.”

Arizmendi grew out of a study group in 1995. The group was studying thriving cooperatives in Spain, the Basque region and Italy, to find out why they were not similarly flourishing in the United States.

The study found that cooperatives in other parts of the world used their success to build new cooperatives, while co-ops in the United States were more scattered, without any kind of network to connect them.

“Learning to cooperate among cooperatives has been one of the keys to our success,” explains Tim Huet, a participant in the ’95 study group and member of the Arizmendi Development and Support Cooperative. It is this branch of the Arizmendi Association that coordinates the development of new cooperatives while providing ongoing support to the existing bakeries.

The successful Cheeseboard Collective, which became a cooperative in 1971, presented an excellent, local model from which to build future cooperatives. When approached by the study group, the Cheeseboard Collective agreed to lend its name, recipes and facilities to train people in starting a network of new local bakeries. In this way, Arizmendi was born in 1997, opening its first bakery named after Father Jose María Arizmendiarrieta, the founder of the Mondragón cooperative movement in Basque Country.

The Development and Support Cooperative of the Arizmendi Association is the closest thing in the organization to a manager insofar as it creates the business plan for the cooperatives, finds the funding to start them, recruits and trains the new worker-owners and provides ongoing education and legal support to the bakeries.

Everyone hired at the cooperative goes through an extensive business education program before becoming a worker owner. Tim is a part of this training process.

“We teach them how to read financial sheets and make decisions from that. We teach them conflict resolution because in our co-ops, there are no bosses. There are no managers. There is no one to solve your conflicts so we teach people how to work things out directly.”

The worker-owners are also taught the legal responsibilities of being an owner and director of a cooperative corporation, alongside the history and principles of cooperatives. Learning how to facilitate decision-making rooted in consensus among owners is another important element of running the business.

No one co-op is the same – individual worker-owners decide the shape their cooperative will take, and the differences between the bakeries tend to exist in how much the co-ops delegate decisions and tasks.

The beauty of cooperatives like Arizmendi is the flexibility granted to their workers. As the business changes over time and in size, so can the structures by which the worker owners decide to operate.

However, one consistency across all of the bakeries is the central tenet that every worker has one vote for every decision made. Thumbs up are a go, thumbs to the side are a stand aside vote, and thumbs down are a block. To maintain accountability and clarity in the decision-making process, stand aside and block votes have to explain their positions.

Arizmendi Emeryville delegates decisions among different committees to keep the many tasks at hand from becoming too many or too tedious, and every worker-owner is expected to be involved. Some committee positions are elected like the Policy Council, the Hiring Committee and the Collective Evaluation Committee. Examples of the volunteer committees include those that deal with finance and marketing, the details of production, and the maintenance and repairs of the bakery property.

Currently, one of the most challenging decisions facing the Emeryville cooperative is how to increase their prices in a global climate of rising food costs.  It is a delicate and difficult line to navigate between sustaining the bakery and worker-owners while still keeping the food accessible to the community.

Over the years, Arizmendi has met great success with its business model. In 2010, a year in which jobs loss was high and few new businesses were created, Arizmendi opened two more bakeries employing 30 plus people. Furthermore, Arizmendi has sparked inspiration in other parts of the world and for those who are moved to create cooperatives of their own, Arizmendi has the policy of spending at least an hour with whoever contacts them seeking support and advice.

For both Tim and Tiffany however, the greatest successes of the Arizmendi Cooperative Association are interpersonal.

“A lot of times when we hire people they’ve never been asked how they want their work place to run, they’ve never been asked to make decisions about their pay. So it’s a profoundly altering experience in that case,” explains Tim. “A lot of time people gain skills about conflict resolution with each other and how to run meetings and how to run a business, that then spill over into other aspects of their lives – their family lives, their community lives.”

On a personal level, Tiffany says that the amount of time, energy and personal investment that she has put in the bakery is something she was never compelled to do when she was working for someone else or as a union organizer.

“I’ve never felt taken advantage of or pushed to do something that I couldn’t do – that I didn’t have the training or support to do.”

Tiffany described a lesson she received in humility after years of working the same shift. “I thought I knew everything and there wasn’t anything I could be told that I didn’t know. But that was so arrogant. I realized I have to learn how to listen to people when they have feedback about my stuff. I started practicing taking feedback again and not taking it personally- it’s not about me, it’s about the food that we are putting out together.

We fight like brothers and sisters sometimes. There are a lot of family dynamics there. You know, sometimes we bring our A-game and sometimes we don’t. What I’ve experienced in the last couple years is that we call each other out when we are not doing what we are supposed to be doing and that is really hard because how do you give someone feedback in a way that is going to help them out and not shut them down? That is something that we have all been learning about.”

If she were to leave the bakery, Tiffany said she would go to another worker-owned cooperative because she could no longer imagine working for a boss or a system in which she has no say.

“Look at what is happening in Wisconsin right now. We have to have more structures where people are going to be respected and have a say over what is happening in their workplace. It just seems so logical. Why would you go into a work structure that at its core isn’t committed to making your life better? So that you can have sick time off, so you can be with your kids and have healthcare. So that there aren’t unilateral changes to your shift that affect you and your family.” 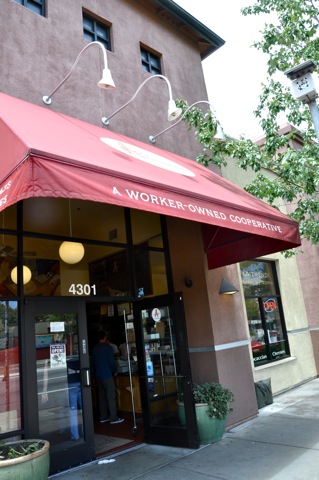 The stability of her job at Arizmendi and having coworkers that care enough to shift schedules and work to accommodate the changes in their colleagues lives is simply something Tiffany had never experienced elsewhere. “I may not always agree with my coworkers but I love them and I can’t say that about my previous work experiences.”

The central aim of the Arizmendi Cooperative Association is to create a truly democratic economy – one in which everyone has a say in the decisions that affect them on a day-to-day basis. The biggest challenges to achieving this goal, explains Tim, are raising money (they do not take government or foundation grant money) and more importantly, living in a society that actually teaches people to be powerless.

“I think our political institutions, and most institutions in our society, train us to be undemocratic and they actually want us to accept a role that is not democratic. They have no interest in incorporating new or democratic skills in folks. The idea is that you will follow orders and so they have no interest in having work places where people learn democracy. They actually train people in this kind of deal where you are going to be an employee and take orders and the benefit of that is you don’t have any responsibility. You can complain all you want about the politicians, you get to complain about your bosses all the time and because you have no power, you have no responsibility.

We often encounter people who have been through enculturation into that and part of our job is to teach them that you can’t just be complaining anymore – you are the ones in power, you have to take responsibility to change things.”

Some worker-owners of Arizmendi have not previously had much input in their lives but now have a voice in arguably the most consuming aspect of life – how they earn a living. They come from a diversity of backgrounds, entering into a collective partnership as owners of their own business, feeding the community, and providing inspiration to others.

Arizmendi believes that the solution to the present broken system is to create an every day democracy.

“If people are working in authoritarian work environments, are going to authoritarian schools then they are not going to have the democratic skills they need to run a democratic society on a city, state or national level,” Tim explained. “So, I really think we need to give people that experience in the day to day – how you come together with your coworkers about how you run your business – and that will lead to reform on a national or regional level.”

One thought on “MR Original – The Arizmendi Co-ops: Democracy in Action”