This piece of writing about Abby Martin and the foundation of Media Roots was written for a college journalism paper. 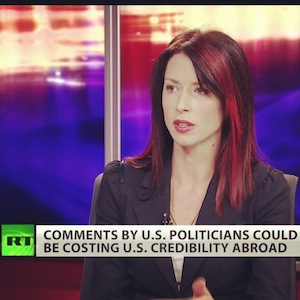 MEDIA ROOTS – Abby Martin initially had little political awareness growing up in Pleasanton, California.  When she attended college at San Diego State University, she was introduced to U.S. foreign policy priorities through her studies in Spanish, Sociology and Political Science. Since then – and especially after 9/11 – she began to realize something was terribly wrong in the world. As she began researching more about the underlying motivations of the corporate-controlled federal government, she became a prominent anti-war activist against the invasions of Afghanistan and Iraq.

Her realization of the glaring inconsistencies in the official rendition of the September 11th attacks prompted her to also become active in San Diego’s 9/11 Truth Movement. Through this movement she realized that “media censorship is what prevents pertinent information from reaching the masses, fostering an environment of ignorance and complacency,” according to Martin.

In 2009, Martin joined an independent media outlet entitled “Your Network.” After a year long stint of producing, directing and starring in weekly political exposés, the organization dissolved. However, her passion still thrived. Media Roots was her next brain-child, which fostered the spirit of the old media network while, as Ms. Martin explains, “provided an avenue to share and grow her journalistic endeavors.”

Media Roots has come a long way since its humble grassroots beginning. Writers from around the world are now contributing content that is under reported in the mainstream media. Subjects have expanded to original artist interviews and in-depth commentary through a variety of mediums such as radio, video, and written word. The citizen journalism project reports primarily on corporate and political corruption from outside party lines. Some stories covered include Kyrgystan’s kidnappings of brides, lessons on the elite Bohemian Grove camp-out, and the toxic elements now circulating in the global food production.

“I typically rely on RSS feeds and Twitter to find videos and articles to cover,” Martin explained when asked about her research regiment. She also has a stark viewpoint when it comes to politicians. “Political personas don’t always match…. What political figure has been entirely honest about his or her intentions? All politicians are actors in a sense. They say what they need to maintain their position in government.”

The site is overseen and run by Martin herself and funds it with no advertizing revenue. She mentions that it can be difficult to keep site contributors motivated with her full-time obligations at RT America. But there are still goals for growing Media Roots, such as an upcoming redesign for the website and constantly generating content for public exposure.

There are many aspiring journalists that can learn from this driven activist-turned-journalist. “Many individuals now have the tools to be a citizen journalist whenever they want. Live-streaming, social-networking, and blogs are all ways one can start to report and remain proactive in communities… to tell the truth from the grassroots level without the corporate spin. Hone in on what you are passionate about, and let that passion flourish.

“Everyone has talents – unique skills to offer the world. With some reflection and discussion, one can find out what those things are and use them as tools for self-expression and to contribute to better society as a whole.”

Currently, Abby Martin sits on the board of Project Censored, the largest research organization in the U.S., and anchors at RT America’s DC bureau.